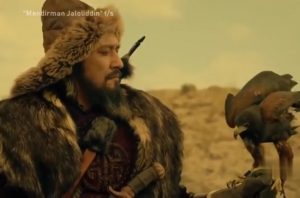 It sounds like a song.Genghis Khan is lost.Jalaluddin hides from there and saves the girl along with his soldiers.

The next day, when you left Genghis Khan, you started crying So only one soldier comes to Jai Khan And says the boy is not in the tent.

Jaji Khan weeps for Jalaluddin And he says you have picked up the girl.And they start looking for things.

But they get nothing.Jalal al-Din says that this action can cause harm to Dosti.Then you leave.

Jalaluddin knows that Genghis Khan will send his army.In so doing, Genghis Khan’s army follows you.

Jalaluddin, along with Timur Malik, bravely kills these Mongols.

Every queen is preparing for Jalaluddin’s wedding in the palace.

In which the work is being done according to the family.

In which Shahi Nahgban tells the Queen That all mosques will be decorated.

Food will not be distributed to the pilgrims in the mosques.

In which there will be two hundred tandarchi which will be divided into three gurus.

Nahagban tells the queen about many other things.

Then the queen says you can go and Nahgaban leaves.

The queen calls the eagle. If there is a lack of preparation So she will harm my reputation.

The queen says that Jalaluddin is getting married,I don’t see jealousy in anyone’s eyes, evil!The queen says, “O Allah! May my prince return with goodness.”

There is a nightmare in that Jalaluddin stops at a place to spend the night with the envoys.

They are looking at your stars.She comes and sits next to you and asks,Do you know about stars?La Lidin says yes! She asks the boy

What is the name of this blue light star?You say he’s light,In Greece it is known as the Seven Sisters.

You say that my grandmother says That even the angels get a headache in the morning.

The boy says that you know how to impress a girl very well.Then she says, well done.

What is the name of this star?Each Timor sat with the emissaries.

The envoy says that he will escape from the prey of Genghis, Jalal al-Din.But which women will they avoid? Timur Malik says I don’t understand?

“I think Jalaluddin wants to marry her,” he said.All of these women can be ashes.

Jalal al-Din says, “Tell me your name.”Then she says that I have not grown up like two women.

I grew up with swords.I’ve never had peace.My tribe is in a lot of trouble So where can I find peace in my destiny?

Jalaluddin says tell me what happened to you.She says we lived a quiet life.

He took my father away from me.Jalaluddin says, “Why didn’t Genghis kill you?”The boy says that his mother had the eyes of every commander.

I fought it bravely and got hurt.They were taking me to be hanged.

Then I tried to run away from there, then you will come face to face.

On both sides, Genghis meets the two men of Garganj And he takes notice of the palace And the sultan plans to kill al-Din al-Din.

Then he kills them.