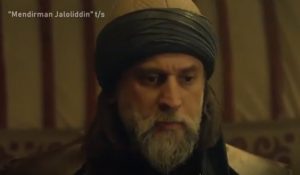 In the beginning of this episode, there are smallpox!Says a woman That the queen wants to do everything in her own hands.

My son will die I am also entering.

Sultan Al-Din is also with him.

The Queen is just looking at her future.

The woman says that Dont you worry.

One of the women comes and says Say the queen is calling you to the courtyard.

The smallpox woman says, “I’m here.”Yes i am You come down to the courtyard.

The queen also comes in this number.

The queen was accompanied by Sherin’s prince.

On the other side, Genghis was killing his wife.

Jalal al-Din stops them from killing.

Genghis says I don’t consider anyone a friend.

Jalal al-Din says that you are the son of Sultan Alla and al-Din!Jalal al-Din’s words must be obeyed.

Genghis Khan is shocked to hear this And don’t kill the girl.

Genghis says that you are the prince.

Then he says what, your father knows.

Genghis says, “Won’t your father punish you?”Jalal al-Din says, “If you have a son, what will you do?”

Genghis says: Absolutely! Then he says there will be a long talk on eating at night.

The queen, on the other hand, looks at the prince without eating What is that, Ma Sha Allah! And she says That your mother has taken good care of you.

Every smallpox woman gets up from there and comes to the tent of Sultan Alauddin.The relationship did not go against his will.

In the meantime, the Queen enters the tent of Sultan Alauddin And she says that the Sultan should stay away from these relations.

Sultan Ala-ud-Din says that nothing will happen until Jalal-ud-Din comes.Would the Genghis Khan’s army have captured the boy and punished him in the tent?

Genghis says that if he had failed, he would have succeeded.

Jalaluddin says I am sure I am also successful.

You are all in the tent, Timur Malik, says Jalal al-Din, now everyone knows.

Will Genghis not attack on the way?Jalal al-Din says: My intention was only to save his life.Don’t find the city.

Then Timur leaves the country.

Jalal al-Din calls his soldiers That we have to save this girl.

There is a nightmare in that.

Jalaluddin arrives at Genghis Khan’s tent with envoys And it doesn’t start eating.

You do not start eating after reciting Bismillah.

Says your father, are you all right?

All that you give is the grace of Allah, you are right.

Genghis says, “Greetings to your father, Jalal al-Din.”And he says that Genghis Khan is the ruler of the East.

And Sultan Ala-ud-Din is the ruler of the West.Our faith will always be there.

Jalal al-Din says: Thank you for your hospitality!We’re glad you set the table.

Jalal al-Din says Our Sultan has sent us here to strengthen friendship.From the words, it seems that Do Sati will remain strong.

After they have finished eating, everyone comes out of the tent