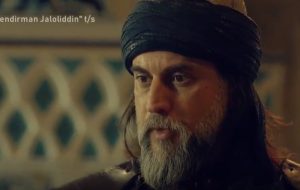 The Nazarenes arrive at Jalaluddin Palace at the beginning of this episode The queen greets you.

There were Qin Greats U.You say that these are murderers.These are our guests.

Genghis Khan has destroyed his tribe

They have none.Only one spa comes in and says,Sultan Allauddin is calling you and the ambassadors

All of you are with Sultan Alauddin.The Sultans say,The commander of the army, Timur al-Mulk, has succeeded in his journey And come before us.

Then Sultan Ala-ud-Din says That the head of the state, Jalal al-Din,Please tell, whats the story of them big puppys .

They will tell you everything in detail. They honored you.

His weapons and armies are ready to fight.

My Sultan, I think his spies are everywhere.

Whatever the plot.It has it.

We have felt the same way.Sultan Ala-ud-Din says to keep talking.

Jalal al-Din says that I.I can tell you for sure that his eyes are on our land He wants to attack here.

In fact, he wants to conquer the whole world.

Sultans are called Ala-ud-Din Shams-ul-Din What can happen to you?

Shams-ul-Din says that in my opinion we have succeeded in making friends.

Sultans are called Ala-ud-Din You have four things to say We don’t need to worry about Genghis Khan.

Jalal al-Din says that there is a great danger,O Sultan, because of the treaties we have signed They don’t matter.

While he has decided to take over our menus So it is not difficult for him to break the contract and come to our menus.

My Sultan! There is no doubt about it Because I saw only one thing in his eyes And that is just and only war.

Sultans are called Ala-ud-Din That I still can’t fight the Mongols.

Sultans are called Ala-ud-Din There is something that Jesus did not tell us about imprisonment.

I want to know this issue.Jalal al-Din says: I have brought a prisoner to you as if he had been stabbed.

I have freed myself from Genghis Khan’s captivity.Sultan Allauddin said, “You have escaped from him.”

Jalal al-Din says that I liberated that woman from her oppression.

Sultan al-Din said angrily, “Didn’t Genghis know?”Didn’t he send anyone after you?

But we killed them and changed them.Sultan Ala-ud-Din is called Jalal-ud-Din That you have disobeyed our command.

Come on Sultan! Will be punished for disobeying the order of Sultan Ala-ud-Din that Jalal-ud-Din should be taken to Dal-e-Karzdan in torture.

It should also be included.

Jalal al-Din says that the command is yours! Sultan Al-Ul-Din calls out to the soldiers, telling them to take him away.

The soldiers take Jalaluddin to prison by putting him in shackles.

Only the soldiers of the party say that we are equal partners in this.

Jalal al-Din says go back.Then they take you to prison.

When the queen finds out So the queen says, “Put my son in prison.”

The queen says, “Go, get my son out of prison.”

Whoever pleases, let him fast immediately.

The soldier says that the order! Then the queen comes to the tent of Sultan Alauddin and says.

Is that what I heard?Why did you put the prince of Ner or Sat in jail?

Sultan says How can you interfere in the affairs of the Sultan in any way?

What do you do first?The queen says that I am in the pillar of this palace.

Sultan Allauddin says that you Sultan will speak in this tone.So you will surely lead the state to destruction.

The queen says that I have ruled over the kingdom.

Sultan Alauddin says that if you have forgotten So let me tell you, this is why you ruled in this palace Because we used to conquer and succeed with skill.

It is also a matter of state.The queen says that you know the soldiers who were with you,Whom did they give?

They used to give me.Sultan Ala-ud-Din says to get away from me, O Allah.

Give your last words what you are saying On the other hand, the soldier obeys the queen’s orders and the life goes to her.

The two-headed soldiers seem to have died.

Jalal al-Din reads the prayers and sees that the soldiers are fighting behind him.

You command and say to the soldiers They just say that you are all brothers, why is there such a difference between you? They have disobeyed the order of the Sultan.

The soldier says that this was the order of the woman.

Jalal al-Din says, “Enough! If you stand before me, you are a ruler standing before them.”

Jalaluddin says that you should not go to any other woman That they are united with the Sultan, in that is the good of the state.

It is better for them to be united with the Sultan.

Do not go against the Sultan for my sake.

Don’t disturb anyone else’s comfort for the sake of my comfort.

Then they say let’s go.

Every queen says to Sultan Ala-ud-Din,Free my princes.

I want to talk to her about marriage I would like to meet her.

I put him in prison and let him go.

It is true that you put him in prison and I got him out.

Genghis says on both sides Did you see what Jalal al-Din did to him?

He disobeyed his father’s command and came to us.

Says the son of Genghis If he did not want to, he could not escape.

Genghis says it all happened on my own.

Haji Khan says I think he will marry her.

Genghis says he does not know who he is.

He does not know that he is ours.