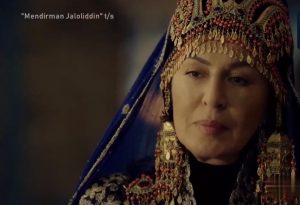 Hassan Sabah says on both sides Tell me the names of all these commanders.

Those who obey the orders of the members.

The spa itself says that He has an army of 30,000 soldiers along with Talu Khan.

The army of Ihtiyar Din and his army of thirty thousand soldiers in Bukhara.

Hasab al-Din has an army of forty-four thousand soldiers under his command.

Fakhr-ud-Din Mohd, who is with the army in Tarz, says He says I don’t know how many spas he has.

Then Hassan says that in his name Join Hassan Beg.

A man comes to the door and says Say, Hasan Sahib, whatever comes to you.

Sun Sabah says Every one of us will agree with Hassan, then he says go from here.

The one who sits in the middle and says, “Is there any room for forgiveness for me?”

They say go from here.

Hassan says those who do not fulfill their responsibilities deserve death.

On both sides, the smallpox tells the women to take the guest to the market.

So that they may rest.She takes the woman to the market.

The woman says you haven’t bought anything.

“I bought a gift for Jalaluddin,” she said.

Then she says that I have heard the name of a famous woman.

She gives him some news of the palace.

Then she says that Jalal al-Din is in captivity.

Hassan says that Genghis will be very happy to hear this and you will help him in this.

The boy says how can I do that.

Hassan says that there are such commanders in this list Who can overthrow the throne of the Sultan.

You can hide it in such a way that it falls into the hands of Al-Din.

The boy says it is difficult, there will be many guards at the door.

Hassan says how can anyone sleep.

Every fight seems to be going on. Hassan says where to go.

The boy says what is it now. You are forgetting the gift.

The girl you came with can ask you.

In each case, they have seized it, despite obstacles we can scarcely imagine. ”

In the meantime, the Queen comes to her senses and asks Jalaluddin, “What happened to you?”

Are you obsessed and why are you making the world a better place?

Jalal al-Din says that he has been playing with Timur al-Mulk for four years now.

If I am wrong, the queen will be mine.The queen says it’s a strange sight.

You are playing here and I am fighting with your father for your freedom.

I sent my soldiers to set you free, but you refused to come.

The queen says, “If so, why are you still here?”

Jalal al-Din says that my soul is bound by your command and your body is bound by the decree of the king.

Don’t worry, as soon as the king’s order comes, it will be done.

Then the spa says it is from those who are very grateful to you.

But it goes away.

The queen comes to her room and asks the woman, “Where did the murderer take the gift?”

The woman says that Bahram took it from two ears.

The queen asks, “Where are you going?”

The smallpox is waiting for me.

The queen says she doesn’t know what you told me.

The woman says go now, as the queen says.

She asks the woman if Sultan is in the room.

But the sultans are Egyptians.

The smallpox says, “What do you mean, they are Egyptians?”

Jalaluddin’s brothers come and say I thought so That is what you will do.

What did you get by going there? Where did the sleeping animals go? Jalaluddin says you don’t understand I’m not surprised about that.

Because you don’t understand these things.

Hi says if you have everything why are you here? Aren’t you angry about that?

“I am not angry that I am in prison,” says Jalaluddin.

Rather, it is your work that is strengthening me.

In addition to each of the sultans, Al-Din orders his second son.

That he should guard the frontier with his soldiers.

Timur Al-Malik comes to life. He is also playing in his life.

Jalal al-Din says, “Come, Master!”That you have loved life like that As if attacking strategy.

As if attacking strategy.

Jalal al-Din says that your trick is to teach.

Timur says he must have chosen his own way.

Jalaluddin says why are you here?Timur says I didn’t tell you?The Sultan has abolished his sentence.

We have to decide on beauty as we have developed the strategy.

Every one of them goes after Shah Hassan.

There, Hassan is killing the soldiers.

After defeating Az Lak Shah, they come to the palace.

Jalal al-Din meets his wife and Al-Din says that she was very upset.

On the other side, she enters the tent of the boy’s queen and runs away, hiding in a box on Bahram’s lap.

The queen comes to her tent in a hurry.

In it, the women tell the queen That Az Lak Shah has returned to the palace?

They have brought this traitor back.

Timur is currently questioning him.

The queen says, “May God bless you.”At whose request did you do this?

Timur says what is their purpose? He says to overthrow the king.

Timur says how dare you say that.

Show a limit? There is a woman in the room.