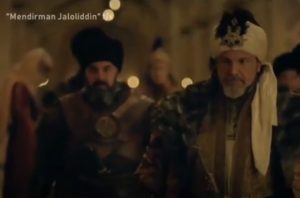 Nazreen says Hassan Beg at the beginning of this episode Bring my soldiers and clothes. I have some friends in the palace.

The spa says What are you going to do on your own?

Yes! I go and see what the assassin Bakr has done.

The spa says she is asleep That iI have made my family by just doing one thing.

Every one of them is going to his father’s room.

Your mother listens to you and says That it is the sound of loud voices.

This sound is very successful.

Every Jalal al-Din stands with the murderer And they say to the murderer, “Will you answer my question?”

I look forward to hearing from you.

She says that she is a brave son like my lion.

Come to me. Thank God I told you to be patient.

On the other side, the queen says to the woman That the sultans and the gods were alive They saw how Hazalak Shah immediately seized him and brought him back.

The woman says The queen is lucky That all your grandchildren are brave.

The queen is going to Azalak Shah on the way Sultan Alauddin is found And they ask where you are going The queen says that I am going to see her.

Sultan says that he will find another time.

We have also come to visit you.

The queen says that the sultans have come on their own to visit their parents.

There have been some incidents during the night.

The queen says I don’t understand what you have to say.

The queen says we are still proud of what you did to Jalaluddin.

Sultan says it is not anger but a mistake.

The queen says tell me before you tell me my mistake What are you going to do?Are

Every murderer says, “Will you be happy with me from now on?”

If you are, I can answer you by thinking.

And she says that it is a matter of honor for me that you sleep for me.

Each of the sultans says that his room will be searched for the safety of the state.

The queen says, “What have you said?”The queen says if you don’t want to If I don’t say anything in front of the soldiers, then go back.

Sultans say get out of my way.

I will still do what I have to do.

Every Jalal al-Din is with his soldiers. The soldier comes and says, “Prince!”

Jalal al-Din says what happened? He says We don’t have the power to hurry.

I will tell you along the way that this is very important.

On both sides, Genghis is in the room with his son.

The soldier comes and says that our work is going according to us.

Genghis says how long this journey is.

The spa tells you to do as much as you can.

Genghis says that as long as we don’t want to So they can’t unite even at the door and we will reach their fortress.

Haji Khan says that Sultan and his children will not be able to do anything.

Every sultan starts going to the queen’s room Your parents say you are playing with fire as a child.

Every Jalal-ul-Din asks Spill That all this has happened with the words told by Hassan, says Spa Yes! The sultans say that they should be removed from my path or I will kill them.

The queen says I will remove them, but strangers are forbidden to enter.

If you want, you can come to Khameen’s room and search.

Will this be our value now? Says Jalal al-Din That Timor-Leste Where is he? The spa says that he is interrogating Hassan.

The sultans are searching the queen’s room.

The queen says what are you looking for.

The Sultan says to lose this throne.

If you start to lose your seatbelts, then so be it Is lost

You say how can this be?

How did it get into my chest? Sultans leave the room And the soldiers are told that the names of all these commanders are on the list Who can overthrow my throne.

In all of these crimes, the women themselves are involved.

The Sultan said, “Present to me the soldiers of Timur al-Mulk.”

You say don’t try to defend them.

The sultan locks the queen in his room.

Timur comes to the country, the Sultan. The Sultan gives the order That whoever is involved in this fitna should be killed.