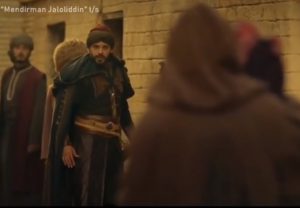 The soldier shouts that Jalal al-Din is inside.

Sultan tells Timur to get rid of Al-Din al-Din.

Timor-Leste says they cannot be eliminated in one day.

It is impossible? Sultan says angrily, “Isn’t this your job?”

Emur says that even the smallest mistake can lead to our defeat.

Nizam-ul-Din says my Sultan! We need Jalal al-Din to do all this.

The Sultan said angrily, “What are you talking about?”

Timur says that Jalaluddin should not do anything that hurts his heart.

As soon as Jalal al-Din comes, he says, “My Sultan!”I came here without you.

Jalaluddin says I have some responsibilities Which forces me to go too far.

Sultans say that if you behave like a common man you will be treated the same way.

Jalal al-Din says: I know, my Sultan!Then they say, “Do not wrong my grandmother because of the words of a criminal.”

O Sultan, we do not want to destroy this strong support with our own hands.

Which is our strong support against Genghis Khan.

Every queen says that it seems that you still do not know who the real owner of the palace is.

I will take revenge on each of these traitors.

Jalaluddin says that when I put my flag on the tent of Genghis Khan, my wife will be with me.

Jalaluddin says don’t get confused That from the country which He betrayed that he is Jalaluddin.

Your brothers would say: My Sultan! The shamans want to weaken you So what do they do Will

If a decision is made against a woman, she will divide the country into two parts.

My Sultan, are these true?

In the meantime, Azlaq binds Shah Hassan and brings him to the Sultan.

Sultan says, “I don’t understand what that means.”

Azlaq Shah says, “Don’t be shy, my Sultan!” This Gaddar wants to say something.

Hassan says that you He wanted to remove Jalal al-Din from the throne and make him sit.

As soon as the Sultan hears this, he begins to fall and says,I put it.

The soldiers were taking Jalaluddin to prison So you and your soldiers kill those soldiers and take the assassin Bakkar with you to a market.

Jalal-ud-Din is asked to go to the residence of Najm-ud-Din Kabrani.

The murderer says we will wait for you there

Every queen secretly meets her soldiers and says, “Let’s tell the whole world.”

If my great Lord had made me a man, I would have scattered Genghis Khan’s footsteps in the air.

She would put her own tent on her tent.

Every murder that comes to Bakr Hassan, Hassan says no matter what happens.

The assassins say that Jalaluddin thinks that Hassan’s family has been captured.

He has been freed from it with his sword.

Hassan says if you are telling the truth then understand that you will be released.

Jalaluddin comes to Hassan’s house and says that he must be careful.Anyone in the house

Then you see a person You suspect him and as soon as he sees you he starts running away.

You tell the soldier to go after him in your sight.

Jalal al-Din goes after him.

Every soldier saves a woman and a child from Hassan’s house.

Jalal al-Din goes after him, so much so that he is killed.

And he puts a dagger around his neck.