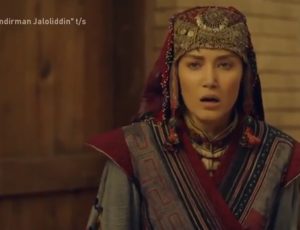 At the beginning of this episode, the queen leaves the palace with her soldiers and sets up her tent in the desert.

Every Jalal al-Din says to him, “If you want your life, leave it.”Hassan Beg comes from behind And kills that person.

Then Jalal al-Din He comes to the palace with the murder of Bakr.

Sultan Ala-ud-Din asks Timur al-Malik who he has brought with him.

Timur al-Mulk says That too will be known.

In the meantime, the soldier brings Hassan. The child sees Hassan and says Baba.

Jalal al-Din says, “Now tell me, what is the real thing?”

Hassan says it is a lie that the Queen’s hand is behind your overthrow And it is also a lie that Jalaluddin will be enthroned after you.

Then the spa takes the beauty.

Jalal al-Din says, “My Sultan, can we not be one again?”

The two of you go to the queen’s room.

So do you see that there are no queens in the room?

In the meantime, the envoy sent by the queen arrives And he tells of the power of the queen and of many things.

Did you hear that? I was skeptical because of these words.

Jalal al-Din is called the messenger, who waits for Ab

Sultan Alauddin goes to his room.

The sultans say that whatever he writes now and this letter will be taken to Baz Lak Shah.

The sultans say that Timur-ul-Mulk is told to prepare a plan with his soldiers.

The sultans say that if war is started So I want you to defend the city As you call Jalal al-Din, Jalal al-Din for the defense of your grandmother.This war will end before it begins.

Every Hassan Yabg says it is as if he was killed by oppression.

The tents of the oppressed have been removed We swear by them,We will take revenge on all our martyrs.

We will succeed in our goal.

Every messenger comes back and says The sultans who will be sent through Abzak Shah He says he wants them to be safe.

They have come to know the whole truth.

He says Hassan’s family had made him hostage.

Jalaluddin saves her and then tells the whole truth

The queen says, “Then who put this list in my chest?”

Ali Khan says that what he has is with Shams-ul-Din.

The queen says you can go.

On the other side, Jalaluddin gathers the soldiers and asks What kind of spa are you?

Jalaluddin says who is the sultan of this state?

The soldiers themselves say that Sultana is Nala and Al-Din.

Then you have to obey the Sultan.

Then Jalal al-Din said in anger, “Who wants to fight against them with the sword?”