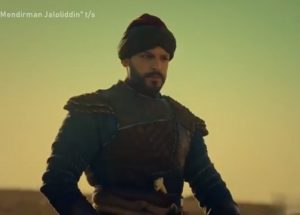 At the beginning of this episode, Nazarin catches Jalal al-Din, the giant To kill him, a man hides an arrow And he gives it to Kumar.

Jalaluddin sees him and runs after him But unfortunately he is jumping from the same roof Only his soldiers can touch him and he escapes from Jalaluddin.

On the other side, the soldiers of Genghis Khan are taking Jahangir, the brother of the assassin, to Bakkar.Along the way, some soldiers kill Genghis Khan’s soldiers.

Jahannagar says, “What’s going on, Master?” He says, “Don’t worry, Prince. These are his own people.”

Every time Jalaluddin arrives at the palace, there is a bag at the door.

Jalaluddin says I did not have the strength to meet you so soon.

“I didn’t bring any presents or gifts for you,” says Behram Beg.

However, he says it will save you from being shot.

We call it Jalal-ul-Din We will check it first.

However, he says that he can try it on me.

There are so many types it’s hard to say.

Jalal al-Din says, “Look at what you have brought,” then he says, “Test it.”

If the assassins shoot arrows, nothing will happen to them.

Jalal al-Din says, “Take care of him. We have accepted his gift.”

Jalal-ud-Din and Qashkh say to Shah, “Let us know the news of this incident.”

You come to the Sultan’s room.

Sultan Allauddin says, “Have you caught the traitors?”

Jalal al-Din says: We have not seized them, but some of them have been killed.

Sultan says he preferred to die rather than be arrested.

Then the Sultan asked Allauddin about the war. Jalal-ud-Din said,I am trying to stop the war in my kingdom.

The sultans say that if they want to fight at all, then you should prepare for war as soon as possible.

On both sides a soldier comes to Genghis and says that Jahangir has been released. Genghis says Take your fastest soldier and bring him to me.

The soldiers go to catch him.