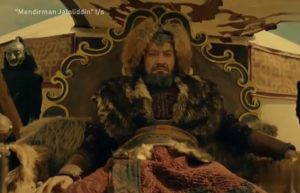 At the beginning of this episode, Turkish women go to war with their wives.

Jalal al-Din has some of his own fighters Come to the queen with And they say, ‘Behold, we have stored for ten weeks And people are ready to fight and fight for their lives.

Commander Timur al-Malik settled in the area and marched to the east and west. The shield is made.

I am standing here between you and Garg Ganj.

Jalal al-Din says: I beseech you for the sake of Allah.

Did you all Have you lost hope? Then they say If you have a little uneasiness, get out of here and come back with your army.

Jalal al-Din says angrily, “If you have the courage, then confront me.”

Our battle will decide the battle.

Az Lak Shah They get off their horses and start fighting with Jalaluddin.

But Azlaksh Shah loses the battle.

Then Az Lak Shah The soldier shoots an arrow at Jalaluddin’s chest.

Jalaluddin seems to be advancing to kill this soldier The queen says that I will punish myself in this way.

It is the soldiers who make the noise. Najmuddin is there.

Najam-ul-Din is coming, but my daughter! Who are you going to conquer with your invaders?

Sheikh Sahib draws a line and says death on one side of it There is life on both sides.

Then Sheikh Sahib says, “Make a tent and I have to talk to Rakn Khatun and Jalal al-Din.”

Then Sheikh Sahib, Turkan Khawan and Jalaluddin are in this tent.

But you reconcile them.

Az Lak Shah came in If so, Sheikh Sahib says hug the two of you.