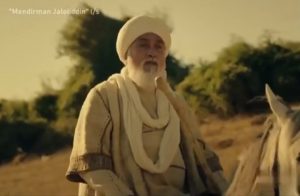 Azlak Shah says that if you had an arrow, then who are you standing for?

Jalaluddin laughs and says you will go.

on the other hand Sultan Ala-ud-Din asks Nizam-ud-Din if Sheikh Sahib has arrived.

Nizamuddin says that he has also drawn a line between them.

Only one soldier comes in and says that Sheikh Sahib has given up the fight.

You give your finger to this soldier as a gift.

Then the Turkish women tell their soldiers that we could not stop Sheikh Sahib.

This victory is a great victory. You will get gold according to your deeds.

Then the Turks, on the way to the palace, arrange for the arrival of the Turks, in addition to the Sultan.

After a while, the women return to the palace.

Sultan Alauddin What kind of women do you welcome?

Then they say, “I came to you tonight.” Happiness is the key to success.

Then the women go to their tents.

Every sultan says to Aladdin, “We did not expect this from you.”

Every sultan says, “Unless we forget that you have done this.”Don’t come before me until then.

Then Sultan Alauddin goes to his room.

On the other side, Genghis Khan’s army comes to Sabutai, Hassan Sabah.

Bo Taei says you killed the goat’s brother and saved him.

Hassan says what good will it do us?

Then Sabotai leaves from there.

The two sides are preparing a new army in the palace along with Shams-ul-Din.

When the assassins of Bakr and Jalal al-Din enter the room on both sides, the soldier says Jalaluddin is not in the palace and this is the end of the episode.