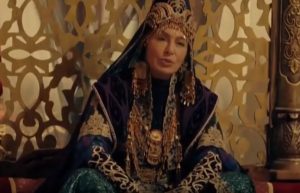 At the beginning of this episode, Nazarin is seen in the room of Shams-ud-Din, Nizam-ud-Din and the two heads of the Sultan.

Nizamuddin says what are the misconceptions?

In addition to this, Sultans and Al-Din come.

You say no one knows where Jalaluddin is.

No one knows about them.

And Qashkh Shah says that he must have gone to complete his other work.

Sultans say there is a limit to disobedience.

He did it of his own free will Doing everything

Nizamuddin says you are right My Sultan! When they return, they will be informed.

Then Sultan says he is coming to our knowledge That the Mongols are visible on our borders.

Is that true? There is a ditch So this is a big issue.

The Sultan gives the responsibility to Shams-ud-Din.

Then the Sultan says you can go.

And Fashkh Shah says and nothing else.

Sultans say what I said was given.

Sultan is called Nizamuddin And Fashkh doesn’t think I would have danced in front of Samashuddin.

The system is called Al-Din My Sultan! When he saw your face, he understood.

Now he will be careful.

Then the sultan asks, “Where is Jalal al-Din?”

Nizamuddin says I think he is cleansing the traitors.

I think they have gone after Ali Khan.

Sultan says he can’t do that Because other women will be displeased with him.

But this is not the right time to do it.

Then the sultans leave.

On the other hand, Jalal al-Din says his own So you know where he is.

The three of them have gone hunting together in the valley of Bazlak Khan.

Jalal al-Din says that it is fine Then we took them home.