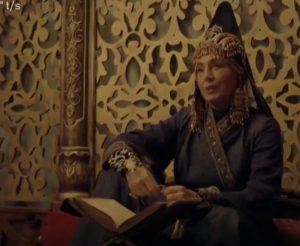 At the beginning of this episode, Jalaluddin is writing a poem in memory of his beloved.

On the other side, a soldier accidentally leaves the snake in the lion’s room.

Then he comes to the woman And it shows that I have done my job.

What a wonderful way to screw people over.Then the women kill the soldier.

On both sides he would bite the snake on the legs of the lioness And she started shouting.

In the midst of all this, the lion cubs come to their rooms after hearing the voices of women.

Then when their feet start to see, the snake can touch the inside.

As soon as they start to see He also bites the snake that kills Bakr.

Then she leaves.Then a woman comes to another woman And she says that the lioness has been bitten by a snake.

Then the lions go to the woman’s room She orders the women to call the sage immediately.

In the meantime, Azalak Shah also reaches the room of the lioness.

They ask how the snake got into the room.

On both sides, the murderers fall.

There are many smallpox cases in women They see that the murder has fallen on the ground.

She comes and picks him up Then she orders the woman to inform Jalaluddin.

She comes to Jalaluddin and starts telling So Jalal al-Din is busy in poetry.

The women are silent.Then the woman speaks twice That the murderer has been bitten by a snake So Jalal al-Din comes close to killing And they pick them up and bring them to the room.