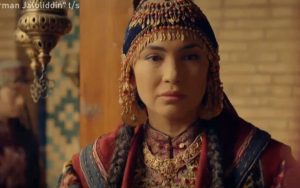 At the beginning of this episode, the viewers come to Jalaluddin Bahram.

Jalal al-Din asks Bahram You trade What else do you do?

However, he says that the prince does not do anything other than that.

I have no other Egypt or faith. I didn’t even get married.

I enjoy new things in the market.I don’t have time

Then Jalal al-Din says that he is getting married to my murderer Bakr.

Behram says, “May Allah bless you.”

In which I have also come to invite you.

However, he says that you have come to invite us to the wedding and we will definitely come.

Behram says, “May Allah bless you.”

However, the prince says that he needs you to give us everything you need.

Then Behram sees the prince in a cloth And he says it would be great to kill Bakr.

Jalal al-Din says yes, it is good Saying this, they leave.

Jalaluddin becomes suspicious That Bahram also has a hand in all this conspiracy.

On both sides of the queen It has a lot to do with it And they are aware of all the circumstances And they say that they called the lioness Khamenei
Is.

Then he says that his parents are very sick And this is probably their last meeting.

On hearing this, the lions and women became angry.

So women give them courage And he told the women to take him to their room And don’t leave them alone and if they are alone
If you want to stay, then stay.

Then the women call the envoy You have come a long way. Please relax.

second On the other hand, smallpox women come to the murderer with clothes sent by Jalal al-Din.

She tells the assassin that it was sent by Jalaluddin And he said get ready for the wedding.

Then she asks Bakkar about the smallpox Get ready to get married.

The assassins say they are ready.

Then everyone tells their own opinion.

Then the Sultan says, “Al-Din.”We will also attack them.

So that they also know our power.

Then the women come in And she says I have to talk to you alone.

Then the Sultan says you can go. The matter is settled.

They all go away.You don’t know She says that Jalaluddin is marrying of his own free will He never asked me.

Sultan says what you did How will he ask you now?

The two sides come out ready to kill And Jalal al-Din.

Jalal al-Din says, “Who is bothering you?”

Killing says it’s a long story Will you listen In addition to each of the sultans, Al-Din is talking to the other two envoys in the room.

Tell them That is the reason for attacking Jalaluddin.

Jalal al-Din says, “Sit down and talk.”Are Then Azalak Shah Jalal al-Din is instructed Jalaluddin says he has been talking for several days Their talk
It’s small, I’m just listening.

“I have seen Bakr’s assassination in the bazaar,” says Azlak Shah He then went to a full house I have gone When I went to this house, there was no one there.

Then someone is coming to kill me So when I looked back and found out that I was Shahzad, he went ahead.