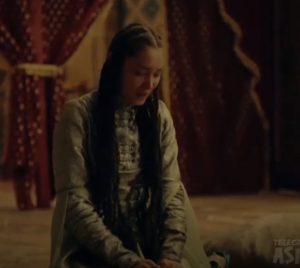 At the beginning of this episode, Nazarin is called Jalal al-Din Say it again and again.

Murder is silent.The murderer says that in fact it was my secret.

Jalaluddin gets very angry And they say why didn’t you tell me first.

“I was forced to kill,” she says.Jalal al-Din says who was compelled.

Then she tells the story of the murder How did he destroy his tribe? How he killed his parents and then imprisoned his brother.

Then Jalaluddin says how much trouble we were in because of you.

It was only because of you that the situation of war came to an end.

The murderer then tells me that he had given me the money to kill you.I will kill you.

But I couldn’t do that.How can I harm so many human beings?

Did you save me or not?It was their wish that you are a human being. You will save me That’s why they sold this net.

Then Jalaluddin gets very angry And there are some things lying on the table and they are thrown down in anger.And the murder is frightening.

Then the murder of Ghajjalal-ul-Din begins to be celebrated But Jalal al-Din says, “Follow me.”

Then she comes with a dagger and gives it to Jalal al-Din and says kill me.

But Jalaluddin is sharpening his dagger towards the other side.

Then the murderer tells me that as much as I am saying, I am doing the same thing and he is following Genghis Khan.

Then Jalaluddin angrily leaves the room And r deaf They come close and start beating And in any case, it becomes unconscious.

Then Timur grabbed the country and called Jalal al-Din Shahzad, just do it.

Every Jalaluddin leaves from there.On the other side, Akash Shah goes home with his soldiers.

Then there are many people And they kill them, one of whom runs away Then they search the place and find them there
There is a lot of evidence from.

Then Jalal al-Din sits in the courtyard with his head bowed.

Then Sultan Alauddin came to them Are And they say you got married today and you are sitting here.

And were from U Goth Merid Tode & U Are Sting Hari.

Then Jalal al-Din says I have done many such things In which you did not get permission.

But now I need you.Then they say that the brother of the murderer is in the custody of Genghis.

Then the Sultan says that he is the youngest son of Behzad Khan.

Jalal al-Din says You know about it “I didn’t know he was my daughter-in-law’s brother,” says Sultan.

Then the sultans tell them to meet you at once Tell him that I want to meet the dog. He lives in a forest.

Genghis Khan wants to catch up But he can’t do that.

This is much more difficult than hunting a lion.

If you go to Samar Qand in the morning, you will find it.

Then the sultans Go to the room Then Akash Shah comes to Jalaluddin They give them proofs and tell them one by one
The person has escaped.

Then Jalal al-Din says catch him and kill him.

Then Jalal al-Din says to Timur al-Mulk, “I am going to Samarqand.”

I will meet you in the forest from there.

Then you don’t get along with your soldiers.