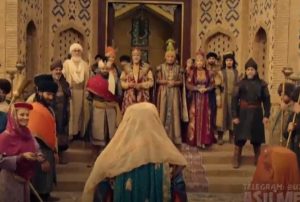 On the other hand, smallpox women are preparing to kill.

The two women are talking in low and low voices.

A lot of killing Get angry And she says shut up.

The smallpox woman says go away.

Then the tall woman says, “Tell me, what’s the matter?”I am your mother now.

On both sides of the aisle there are women That if Jalal al-Din found out that this was our plan
Is I don’t know what plan it will make.

Wedding preparations are going on in every palace And guests come from far and wide.

And guests come from far and wide.

Of them The receptionists do it in a very good way.

Jalal al-Din calls his soldiers There are many traitors in marriage They will harm us. Be careful.

Then they go to the city of Jalal al-Din and Qatlu Gha And give gifts to other people.

Then people give them gifts and bless them.

Then Sheikh Sahib marries them and blesses them.

After the marriage, you both come to the courtyard.

Then everyone Congratulations to you.

They do not start And in this way, they give their fruits to the people.

Then when Bahram finds out that all his soldiers have been killed So he starts running away from there again And the Timurids seize it.

The Sultan sees that the palace is being cleared of traitors.

Then Jalal al-Din and the murderers go to their rooms.

“I am Genghis Khan’s spy,” says the assassin Jalaluddin is very surprised to hear this And then this episode ends.