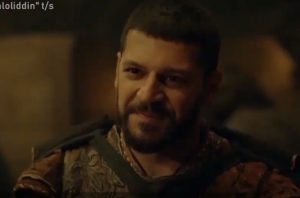 At the beginning of this episode, Nazarin is making a pledge of allegiance to the Sultan besides Al-Din.

In which all the people give their opinion And none of them talk about making a vow to Jalaluddin.

Only Timur al-Mulk says Jalal al-Din He has rights.

The rest of the people are on the side of Zulaq Shah.

Then Sultan Ala-ud-Din is called Spahi Bring that finger.

They give their system to the country and say The guardian of this state is Awzulq Shah.

On both sides is called Jalal al-Din al-Muar You take him to Genghis Khan.

Instead, he came to Jahangir for revenge.

He comes to Genghis Khan with the book And offers Jahangir.

Then Jalal-ud-Din is called Jahangir I am the prince of Khwarizm and the partner of your sister.

Jahangir is happy and embraces Jalaluddin.

Behind him, Genghis Khan cuts off his ear and puts it around G’s neck So the dog seems to be scurrying and scurryi

The original I am the son of a dog.

Then Genghis, who tells Ji to come for the horse and tie it.

In addition to each of the sultans, they call Aladdin, and Zulak, and they give him a thumbs up.

On the other side, Jalaluddin Gar Ganj is on the way, and on the way, Genghis Khan’s soldiers attack him.

In which Jahangir’s teacher dies.Then they come to the car and sit down to eat And he is talking to Jahangir.

So everyone seems to be going everywhere They understand that they are about to be attacked.

Then they attacked the people Give If you are going to kill them, then only a soldier will come and catch Jahangir.