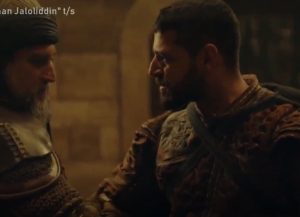 So everyone seems to be going everywhere They understand that they are about to be attacked.

Then they attacked the people Give If you are going to kill them, then only a soldier will come and catch Jahangir.

And he wants to run away. From behind the Timurids And they kill this soldier.

Then the two of them hug and Jalaluddin says what’s new in the palace.

Timur al-Mulk says that the Sultan has made Auzulq Shah his vow.

On the other side, he was talking to Zalq Shah, Akash Shah Are They say I was wrong about you.

You made the right choice. Now we have nothing to fear from Jalaluddin mean while Jalal al-Din comes to the palace.

Then you bless your son-in-law to become the guardian of the covenant.

Then a soldier in the palace tells everyone that Jalaluddin has arrived.

Qatar comes to the courtyard on hearing this And she cries out to her brother.

Jahangir ran away Comes to  He hugs her and looks at her.

Then Jalal al-Din, Qatl al-Baykal, and Jahangir are taken to the palace.

After a while, a soldier brings a message and says The son of Genghis Khan who entered Gar Ganj with a very large army.

Then the sultans call everyone and tell them Who has entered the country with his army.

On the other side, Qatar Aiba met his brother with the queen Brings.

When he kissed the queen’s hand, it smelled of herbs.

And he says why are you doing this? The army is ready on both sides And the field reaches them.

The two armies stand in front of each other and then the episode ends.