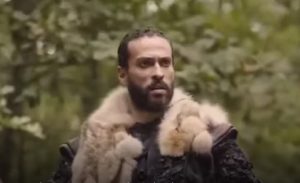 At the beginning of this episode, Nazarin is caught by the prince.

On the way, you will find state soldiers.

They then take this traitor to these soldiers and come to Haji Sahib.

The prince comes and says what is happening

Batini’s hand is behind this attack.

Why are you arresting Tashin Sahiba?

Haji Sahib says, “Have you seen them?”

“I was attacked again when I was trying to catch him,” said Shahzad.

Pharhaji Sahib says it is fine.

The prince says, “What is the ruling for me now?”

Haji Sahib says you are far from this problem.

Shows gets very angry and says I will not back down.

Haji Sahib says you have to obey my order.

Shahzad says, “I am here for this state.”Stay away from Baba.

Then Haji Sahib says I found you,I raised you,I trained you,And I gave you the sword,You have to obey me.

Then the prince draws his sword and gives it to Haji Sahib.

On the other side, the children of Prince Adva get sick and fall down while working.

The women of the tribe pick them up and take them to their tents.

She calls the doctor.Upon hearing this news, the prince came to his father and said, “What happened?”

The doctor says there is no cure for them.

One of them has to be done by every doctor.

Shehzad says where will they meet.

Then the doctor tells you about it.

Where will they meet. Then the doctor tells Tor Nasahaba. Prince Adah had met him before.

On both sides of the aisle, there is a doctor They ask them about a disease.

She asks them, “Why don’t you work for yourself?”

Why do you work so hard?They then tell him everything.

Then there is a lot of talk between the two.

The two sides are preparing to attack the Ba’athist Seljuk state.

They are trying to get revenge on their soldiers.

Then their commander commands Rur Ghosh that you will make their place hell.

He says I will destroy their kingdom.

Then he does not go to the Turks with his soldiers.

Along the way, they are confronted by Seljuk soldiers.

He kills all these soldiers and says I will start my revenge from here.