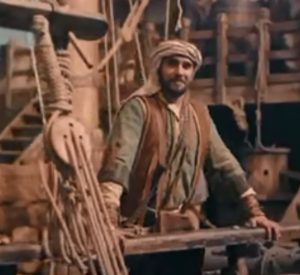 At the beginning of this episode, there is a ship belonging to Muslims.

He is the ship of a brave commander.

He is a good man.Who helps people

He is traveling in the sea with his heroes.

On the other side, one of the Furun’s planes attacked a Muslim ship.

They seize it and take its fruits captive.

Their plot is to attack the two ships of the Muslims.

The ship that belongs to the Ottoman Sultan is full of gifts.

There is darkness in all of them.

The ship of the Muslims is passing through a narrow path.

“Trouble is waiting for us,” says the commander.

In that case, the two ships come face to face with each other.

The people know that the Sultan’s gifts are going on in this ship.

Baba used to say Yes, these gifts are not for you.

Then the fur starts to attack and the fight between the two begins.

Baba and Chacha and his soldiers bravely kill their furs.

One of the ships in the ship whose name appears.

On either side of the house of the Prophet (peace and blessings of Allaah be upon him) are waiting for him by the sea.

Because they were too young to go out on business

On the other hand, in the second half of the day, a woman pulls out two fruits.

And she says you people are of no use.

Then she goes in and says to the fruit.

Today, a ship is not going anywhere.

If you don’t want to make money.Can I recommend a job?

This time around, the situation is much better.

One man says I can pay one hundred.

She says to the boy, “It’s okay. You will get the benefit of it after saving money.”

Then a man comes to the boy and says.

I need some soldiers, she says.

Then she tells the boy, Darina, to tell the cook to buy a healthy lamb and cook it.

Baba and Ruch will be coming soon. I hope they will like this invitation.

On both sides of the aisle, Ruch’s aunt calls Asiya And she asks him if I am pregnant.

Khala Asiya is one and the same.She tells him you are going to be a mother.

Khala Aasia says now you can tell her.

Then she says it will be a boy.”I don’t want to lose hope,” she says.

I’ll let you know when something comes up in a week or two.

On both sides, the commander is in his palace.

Only a soldier comes and says The group you have been waiting for from Stella has arrived.

He goes everywhere with the commander.

The soldier says that we have come to you by the order of Papa Hazrat.

The commander says what have you brought?

The soldier says we have brought swords, helmets and rags.

The soldier raises a chest and gives it to the commander.

The commander says he has only brought fifty chests.

He throws his chest in anger.

The commander then tells his soldiers to pick up presents for the guests.

The soldiers go and they come for two seats When they open the box, there are gold coins in it.

The soldiers themselves say that these are not equal to our gifts.

The commander says these are for your next mission.

On both sides of the aisle goes the bazaar And for the sake of invitations, only the soldiers come.

Isabelle says yes. He says yes.Zabel says tell me what is the matter.

He says that when Ruch came, he had a fight with the lads.

They have succeeded in stopping it.But the man they are fighting with is Anto’s brother.

It reaches Alexander the Great on both sides So people bless it.It is said that you have put his fur to death.

He says thank you! Then Elias says, “Brother, let’s get something.”