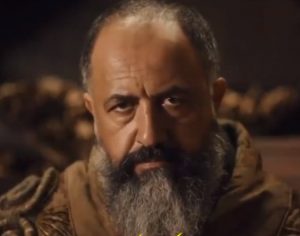 At the beginning of this episode, the viewers tell Haji Sahib, Sanjar the whole truth.

Why did their father take them away from him?

They tell him that because of the state they have taken you away from him.

So that they can protect the state.Then take me to you.

Haji Sahib says that he also gave me a trust.

“The time has come for us to protect the state,” says Singer

Then Haji Sahib tells them the secrets by which they can protect their kingdom.

Singer says okay I have to go now.

It seems that Sanjar is going to be called Haji Sahib.

They then turn their swords from him.Then he leaves.

Singer sits in his tribe with his soldiers He tells them that this is an important duty.

Then he gives them all their responsibilities.

On both sides, the Seljuk soldiers go to Baz Tani’s bazaar.

There they do less than two.

A soldier stops them and says who are you?

Then he says that you have examined every shop and you have not bought anything.

On both sides, Sanjar, with his soldiers, becomes a jerk.

He sees the women there.

Then Sanjar starts to put on his two ears and only one soldier comes And he says you have to pay for it.

They then pay him the rent for the place.

Then they come to the soldiers and say.

No evidence was found against them.

The army says they will break them.

Andreas says don’t forget that Badshah’s Seljuq is a pact of peace with the kingdom.

Andrew then tells them not to follow him when they go.

He is the king of the Seljuk army.They leave the bazaar and reach a forest.

So the Ba’athist commanders, along with their soldiers, surround them.

The commander says we have some questions for you.