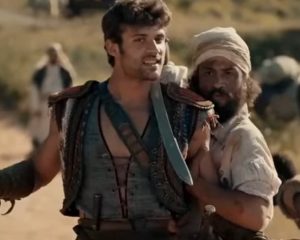 Azabel says you know who you are killing Who are they? Baba and Ruch say no, I don’t know.

Then they say, “Why are you looking at your body?”

Azabel says the one you killed at sea He is the brother of the eldest son here.

The thing about Yashani is that he will no longer be silent.

Then Orch says that if you don’t worry, everything will be fine.

Then they all ate Seem.They do not eat happily.

He comes to the seashore with his soldiers He asks for the address of his house and goes to his house.

Then he leaves some of the soldiers on the shore and says If he comes here, he should be arrested.

They say spa, that’s fine.On the other side of the river, Chacha and his brother come to the shore without eating.

There, the soldiers surround them on all four sides.

Then they are attacked.Baba and Chavaraliya compete with them with great bravery.

They kill all the soldiers.But the number of these soldiers is increasing.

They still compete.On both sides, he reaches the house of Dar Baba and Rach

He breaks it and goes inside.

At home, Orch’s brother and his wife have children.

They are the ones who do it They catch the brother.

And Ruch’s brother says, “You have arrested me.”

Leave my wife and children There is nothing wrong with that.

He says okay. He tells his soldiers to kill his wife and children.

The soldiers kill them all.

They then seduce Dad and Urch’s brother.

Then they leave On the other side, they grab Daco Elias.

Then he also has to give up his sword.

They grab both of them.