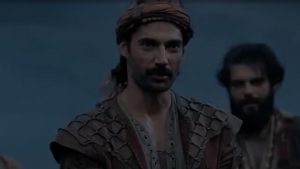 At the beginning of this episode, Nazirin comes to Khidr’s house with his soldiers.

He tells Khidr that today we will do our best.

Zainab comes every now and then and says what is happening here.

De Marji says there are all kinds of things here today.

In all of this, I also come out of nowhere.

Khidr says that you came in front of me and were crushed And they will come again and be crushed.

Then Dimirji says that I have come here to take the books of Solomon.

Take Solomon to me and save me from harm.

Khidr says you can’t do anything with me.

De Marji says that you will not accept this.

Then Khidr says to Agha Jaan Take Solomon and his children with you.

Agha Jan says we will fight together.

Then De Marji said to his soldiers Kill them all.

Then a fight breaks out in all of them On both sides,

in the sea of ​​Ba’ar and Ja’r and Mossi They stand in front of each other in their own ship.

Then Baba Arj says to take Muhammad Ali to me.

Moses says fight me and take it from me.

The soldiers of the two commanders are ready to fight.

It is called the spa of Baba Baar and J.

Sir, I will kill them in Ajazat and they will not even know it.

Baba Baar and J says stop.Then they say to Moses, “I will feed you on dry land.”Who is the father?

Moses says he will definitely wait for you.

There is another plane just a short distance away.

It belongs to the fur of the ship.

They see two ships standing in front of each other The distance between the two is also less.

They call Da’gu the Abu Muhammad in either of them.

Someone has worked harder than us. Then they tell the soldiers to get ready.

We will fight Then Da or Go says stop.

He says you are waiting for me. Diago says I saved your life What are you doing?

We have to catch this man alive. I want to see you there for what you are entitled to.

Then he would say Yes, you are right. Then he said to the soldiers, “I will take my order and take it back.”

Then he says turn your ship around. Every Mossi is called Baba Baar and J.

If you have the courage, take it from me.

Then Elias says why did you kill us?

Baba says I saw another ship a short distance from us.

Of course, there is a need for Moses to come here.

Then Baba says to Ar-Jalias That such a war should not be fought In which we know we will lose.