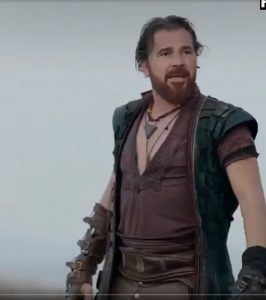 Viewers are joking with their soldiers on the rise of Ghaz Baba in this episode.

to bow down and go down to the ship Everybody is getting excited.

The soldiers look around, but They don’t see any ships there.

In that case, another bullet hits the plane Baba Arj says that the curry is not broken.

Spa says Khidr is all right.

Baba Arj says to the soldier, turn the ship to the other side.

The third ball also comes in that number And because of the cargo on the ship.

The ship is wrecked And all the soldiers fall into the sea Canada thinks I killed them Destroyed everyone.

But only the spirits and the spas are healed.

On the other hand, Khidr and his soldiers are taking the fur to Austria

When Khidr regains consciousness, he is in a field And he sees that Austria is running away.

He tells his soldiers not to run away. That’s when their war with the fur starts.

Shaheen Khidr When he is alone.

His fur starts beating him, And some sounds start coming from the forest.

And he thinks Khidr that the spas are coming.

His fur takes Austria with him And Khidr and yes become unconscious.

On the other hand, Izabel’s father knows that he is coming home.

And says that I have come to take Izabel with me.

Take Izabel They say come on I will not give you to Izabel.

The father says if you don’t hand over the bull to me So you will be responsible for the loss.

Then his father says to his soldiers If they do anything, kill them.

Isabel comes to her father And she says I will go with you.

Then she leaves, says her father My daughter has saved you.

Then they leave. On the other hand, Baba Arj and his soldiers would reach the shore with the help of a stick

Are. All those soldiers are wounded And take care of each other And spend the night on the shore.
<>