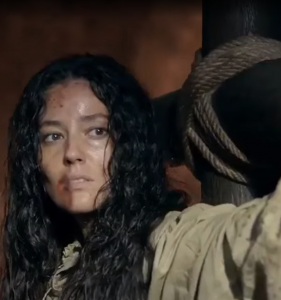 Viewers are caught in the trap of Baba Arj Diag at the beginning of this episode.

He says, “I have entangled you in my snares with great cunning.”

So the soldiers of Diago put knives on Baba’s neck.

He says no matter what you do now, you can’t get out of here.

Isabel faints and when she regains consciousness And she sees that it’s a wall Is tied together.

On the other hand, Khidr and his friend are fighting in the forest.

The girl Khidr was looking for Yes, she gets it She says I am the girl you are looking for.

she says “You’ve been the target of my eye,” says You don’t even know that you have played bloody holi on my land

Then the war begins The dacoit in the house says that if you catch him, he will take the girl with him and go to the forest.

So that girl also starts fighting with them So Khidr gets shot during the fight.

So he says now I understand why you were saying.

So the lads say why do I feel that way?

That death is on our heads.

For that, we have to move forward and catch up.

He tells Ladda that Khidr has got that boy Even though the pages of the book were lost, anyone could reveal his secrets.

Kadala then tells his soldiers not to let these people go out of the island.

Spread out every now and then to catch them all.

On the other hand, he says that he could not save his brother.

I could not behead this killer.

I will not rest until I have beheaded this murderer.