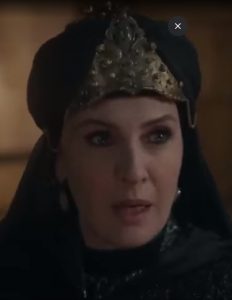 At the beginning of this episode, Nazreen goes on a ship with Khidr and his soldier.

The crew and all the Christian commanders are on board.

It is said that we have besieged Alexander the Great.

If they enter, they will all be caught.

Khidr comes into this room And they put swords around the necks of the commanders.

The rabbi says What are you doing?

You know the punishment for it. Khidr says I am doing this with all this in my mind.

Then Khidr says, “If you do not besiege me, I will kill them all.”

Then the blame for all of this will fall on you.

“I will not stop the siege,” he said.

Khidr says, “I will kill them all again.”

They seem to be killing them.

Then they lock the temples and come out of the room.

Arroyo’s army arrives and says that he was attacked by Peter.

And all our soldiers have been killed.

They have also killed Horus and Joe.

Khidr says, “Where is my forehead?”

He says they have martyred him too.

On the other side, all the martyrs are brought home.

At that moment, the bubble burst.

Then it is announced that the soldiers have found Yaqub’s son in a state of shock.

Upon hearing this news, the stuff in Azbal’s hand falls off.

Then she tells people that they heard it wrong.

Our aunt also comes there and she says she asks them if it is true.

Huma Khala says this is true.

There is a lot of confusion.

Khidr comes to the house on the other side and asks Ralias Where is Agha’s body?

He says he is in the meeting room and is being identified.

Khidr goes there and asks them if they have been identified.

“It simply came to our notice then.

Khidr says that one of his arms was shot in the arm do not have.

That means they are still alive.