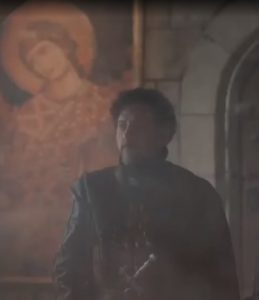 At the beginning of the episode, the Nazis attack Alexander the Great with Peter and his soldiers.

Then they mark their Christians.

Then a soldier comes up to Aroj and says that Peter has attacked.

He says to his soldiers, “Let’s go, soldiers.”

And the levers make the nerve block.

On the other side, Khidr goes after Peter, but he runs away.

Every Peter says he will take revenge.

Then one of the soldiers says, “Sir, we have kidnapped Mary.”

He is now in Clemenceau.

Peter tells his soldiers to open the door and we will go to Kalmino.

“You can’t kill me,” says Lorna Nardo, on both sides.

If you kill me, the whole new world will follow you.

Then you will die.

He says I am not afraid of anyone.

Then he cuts off Leonardo’s neck.

On the other side, Shahbaz and Nita go to a fort.

Following her, her sister arrives.

But there is also a world behind them.

Because Shahbaz has ordered the soldiers not to let anyone in.

Then his sister shoots the soldier.

Then she says I go inside myself.

After hearing the sound of Goli, Shahbaz comes out.

Then he says to his sister, “Why did you do that?”

She says she didn’t let me in.

Then she says what is inside?

He is in prison, but no one knows.

Every Sansar is seeing all this secretly.

After the two of them leave, Sansaar puts a dagger on the soldier’s neck.

Then he says who is inside which Shahbaz did not allow him to enter.

He says if you don’t tell me I will kill you.

He says I will tell Then he tells us that there is a boy in prison whose name is Martin.

Sansaar then leaves the soldier and leaves.