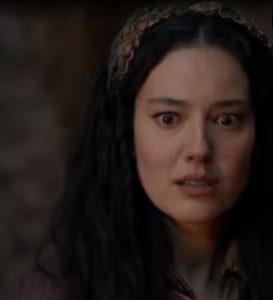 At the beginning of this episode, Nazarin is preparing for a siege with his soldiers.

In the meantime, the King comes there.

They say no one will move.

Then they say leave the preparation of this siege here.

You killed a car Will you be punished for it?

He says I have punished him.

He killed my soldiers.

My family sold them to Christians.

He also seized that weapon.

I have punished him.

Pasha says you are lying.

He says we have to go to the siege at that time, don’t stop us.

Pasha says the responsibility of this siege is mine and I will fight for it myself.

Arj says he is fine.

On the other side, Sansara comes to Ajab and asks him.

Are you going to die? Tears begin to flow from Azbal’s eyes.

She asks if he is my brother. How did you find out about him?

He says that Shahbaz has imprisoned him but you still have to be patient.

We will look into the matter and save him.

Then Azbal goes to Arwaj and tells him that my brother has been imprisoned by Shahbaz.

Then she says you were fine.

“I don’t even have the bill to stand in front of you,” she says.

He says let’s save your brother.

Then the Arabs and their soldiers go to this fort.

And yes, Shahbaz is also present.

And again and again, the fire begins to burn.

Sansaar shoots his brother from behind.

In this way, it is possible to avoid this and Shahbaz becomes very much.

Then there are the O’Rourke and Az-Zal Martin.