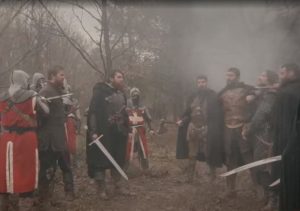 At the beginning of this episode, Khidr has his soldiers With him comes Gabriel’s life.

But it does not get there.

Gabriel is found there.

Khidr says where are the Aruj Agha?

Gabriel says I’m in prison And I will keep you in my prison.

Then I will take my ships from you and then I will kill you all and make this island my fortress.

Then Khidr says, “Come and do it again.”.

Then the battle between the two begins.

Khidr captures Gabriel with his bravery.

Where they have eaten the arc.

Then Khidr says we have come to my place.

Then Khidr calls Gabriel’s army Pir-o-Ko And now you have brought me to you,

and you have brought me to you.

Otherwise, I will kill Gabriel.

Gabriel says don’t let them lose their swords around their necks.

Then Arj says now no one can save you from us.

Gabriel says you are still in my custody you can’t do anything to me.

But they do not accept the condition.

Then Khidr Gabriel is taken with him.

On both sides, Pasha is ready to attack the island with his soldiers.

Khidr says it will not happen again.

Pasha says I will attack.

Khidr says if you attack, they will kill Arj-i-Agha.

Does Pasha say what shall I say to Shahzad?.

That I could not get that fort.

Khidr says no, we have another reason.

The soldier comes in to take Gabriel inside.

Tells him it’s Gabriel Who has imprisoned the Aroos and the Santos.

Pasha cries if you have taken him prisoner Then his soldiers would have become weaker and weaker.

I will attack them and get the island.

Then the king comes every now and then and commands the soldiers Then the attack began.

Gabriel’s friend Paula, along with many of his soldiers, comes to the rescue of Gabriel.