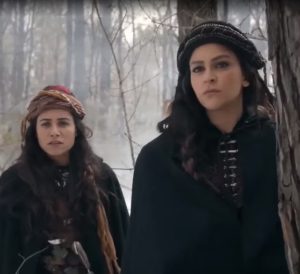 At the beginning of this episode And Khidr gets caught in Gabriel’s trap.

The soldiers of Ar-J Khidr and Ras are very injured.

Gabriel says look how I will kill you now.

Then I will occupy the island.

There are so many types it’s hard to say To help them.

Then he says that today is the day of defeat or victory.

Don’t leave anything in them.

Then the battle begins.

Then the army and its soldiers together kill their soldiers.

Gabriel tells his soldiers to hurry up and take care of him.

In the midst of all this, the arrow shoots Gabriel.

And that arrow hits Gabriel’s chest.

Peer and Paro say we have to be behind.

Gabriel says I will step back as soon as I kill Arj.

Then he says, “Give me my weapon.”

He shoots the arrogance.

The bullet strikes her in the arm.

Gabriel then runs away with his soldiers.

Khidr comes to Arj and says that we are upset.

Then Khidr tells the soldiers we have to go soon.

My forehead is very injured. Soldiers get ready quickly.

They then come to the throne.

Khidr says in a low voice, “Speak to Hakim immediately.

My beginnings are over.”

Khakim arrives in a short time.

Khidr says he has been shot in the arm.

Look at their arms and legs.

The sage looks at the armpits and tells them The condition of their hands is very bad.

The bullet that hit them was a green one.

If the poison spreads through their body, they may die.

Therefore, their arms will be stretched.

In that case Mary says maybe I should break it all.

If it doesn’t work, then cut off their arm.

The sage says it is all right.

Miriam goes to the forest with herbs.

That’s where the herbs come from.

In the meanwhile Shah Sainam chases after her and goes to the forest.

And she shoots at him.

Luckily for her, the bullet touches her arm.

Azbal tells the soldiers to come quickly for the horse.

Then they come for it.

The bill tells what happens.

Khizr makes a hole in everything and makes it yellow.

After a while, Aroj comes to his senses.