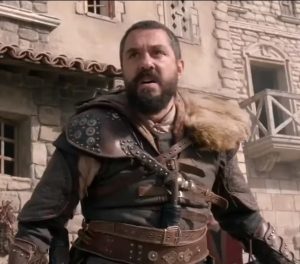 At the beginning of this episode, Nazirin and Gail Barrel, and Shahbaz make a plan.

They wanted us to attack Alexander and capture it.

On the other side is Pasha’s man who is working with Shahbaz..

At Shahbaz’s request, he sells Shahbaz’s ship to Elias and uses it to trap him.

They come to Alexandria to steal their fruits through the people.

In the meantime, Gary Barrel comes there for Shahbaz.

Then he says that we do not want a war.

In the meantime, Shahbaz is urging his ancestors to start the attack.

They start the attack. There is a big fight going on.

Then he shoots Aroj, but Azabel comes in front of him And she gets hit by the bullet.

taken to the hospital His condition is very bad.

They are being killed by the soldiers of Arvaj.

Shahbaz tells his soldiers to go and attack the fort and capture it.

Only his soldiers go to the fort.

Proj tells Peri to go after them and not allow them to occupy the fort.

The foot follows them.

On both sides, Shahbaz and Hamzah are fighting.

At that point, Pierre’s uncle, Kamal, comes to Kalmiz with his soldiers.

And they kill Shahbaz’s soldiers.

When Shahbaz sees that his soldiers have been killed “We have to retreat now,” he tells his soldiers.

Then he runs away with his soldiers.

He tells his soldiers to catch Shahbaz and bring him back.

They go after them. Every one of them said that if he found out that Hamza Sahib had been martyred.

They will not spare anyone. We have to catch Shahbaz as soon as possible to punish this criminal.