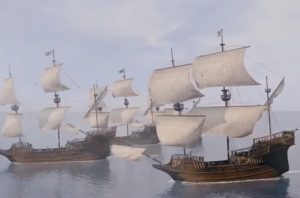 At the beginning of this episode, Nazarin puts Alias ​​in prison.

Kamal Rais says that now the work is done.

We will punish him for his crimes.

Elias says I didn’t do anything. I’m trapped or going.

Then Kamal Rais ordered his soldiers to take them to prison.

Soldiers are taken into custody.

Then Aroj Kamal tells Rais that Alia can’t do that.

Kamal Rais says all the evidence is against him.

They say we will catch Shahbaz for a while.

Then Arj comes to Khidr and says we have to catch Shahbaz.

Khidr says, “I go to Elias and ask him who sold the slaves to him.”

He says it is okay to do whatever we have to do quickly and we have very little time.

Then Khidr came to Comes to him and asks him everything.

He tells her that he was sold to her by that slave.

Murad says One day I know where to find it.

Khidr says we have to get there soon.

Khidr tells Arj that we fall from it If you catch it, the whole truth will come out.

The Prophet (peace and blessings of Allaah be upon him) said:

Take the old man with you and bring him by the hand.

They do not move toward this island.

On the other side, Shahbaz arrives.

Shahbaz says, “What are you doing?”

That is why I want to kill you and remove all doubts.

He tells her that Khidr has gone to catch Danial. If he catches her, the whole secret will come to light.

If you kill me, then you will kill me too. I only know where he is.

Gabriel says, “Go on foot and kill him.”

Then you hid with my friend.

Khidr will not be able to harm you again.