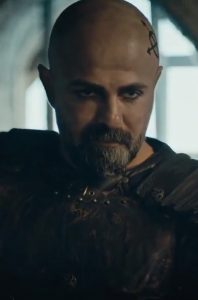 At the beginning of the viewer, Mikael comes to the clan of Osman Sahib with his sister Maria.

So they catch a traitor Osman Sahib.

Usman Sahib brings this traitor to his tribe and asks him on whose request you did this.

He says nobody sent us, we did it ourselves.

Pir Usman Sahib tells his soldiers to torture him until he opens his mouth.

A few days later he opens his mouth and tells them that we were asked by the effort to do this.

On the other hand, Al-Kawsar welcomes Salman Sahib and brings him to his tent.

After a while, Usman Sahib says to him, “Let’s go, you have to meet someone.”

They take Mikael to Cisco the prisoner.

Then Usman informs Mikael to politics that some traitors attacked him when Pastor Gur was with me.

Some of them ran away and some were killed and it fell into our hands.

He has said that in the attack, he had sent Nakal Kusne to attack.

Then Ko Sis tells us It is blaming us for the scandal.

Then Kos says it must be Can be done by rakats or by someone else.

Then Kosus tells Osman Sahib that this is a big trap, it will be better for you if you stay away from it.

Then Usman Sahib says we are wolves, we will lay their trap for them.

Then Usman Sahib says I will find out for sure.

Whoever does this, I will cut off his head.

It is very well received.

They also take her to the Kalin factory, when Maria sees Kalin being made, she likes the Kalin very much.

Then Maar says I will definitely want to buy it.

Then Maria Bala says to the woman, will you prepare a carpet for us too?

The upper lady says yes of course we will come and start making the carpet for you.

On the other hand, Kos quickly comes out of the prison and tells the soldiers to prepare the horses, we must go now, the people.

Then he leaves soon after taking his sister Maria.
On the other hand, Uthman returns to his tent.

Then he tells himself to release this traitor.

Then we will rain swords on them.