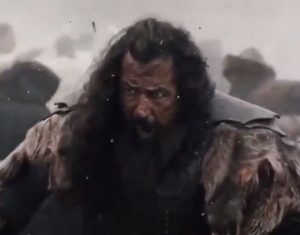 At the beginning of this episode, Nazareen and all the soldiers come to the palace after fighting.

Sultan and all of them are welcomed.

Then they bless the sultan.

Then the sultan says: May Allah bless you Make a lot of money

And with faith and strength for your heart, Amen.

Then the Muslims say, “We have closed the prince’s lips.”

They have been made.

They bring Leparit before the Sultan and the Sultan cuts the rope from his hands.

Then Lipart says you still have a chance to kill me.

And when I leave here, I will come and kill everyone.

Then Aliparslan says you are lucky that no prisoner will be killed according to the traditions of Turks.

Kundwari Sahab says like your order! Then the soldiers are taken to Liparit.

Then queen says you all must be tired so take rest.

Then they call the sultans Allow me, I don’t want to tell this news to Baba myself.

Sultana says ok listen to this Maybe my brother’s condition will improve.

On the other hand, Chagharis Sahab becomes very sick.

Everyone is very confident.

Because Chaghri Sahab had a disease that no one knew about.

He is sick It was just cold.

Saljana says to her daughter, “Go and get some flowers from the forest and bring her some syrup.”

They turn yellow to reduce their fever.